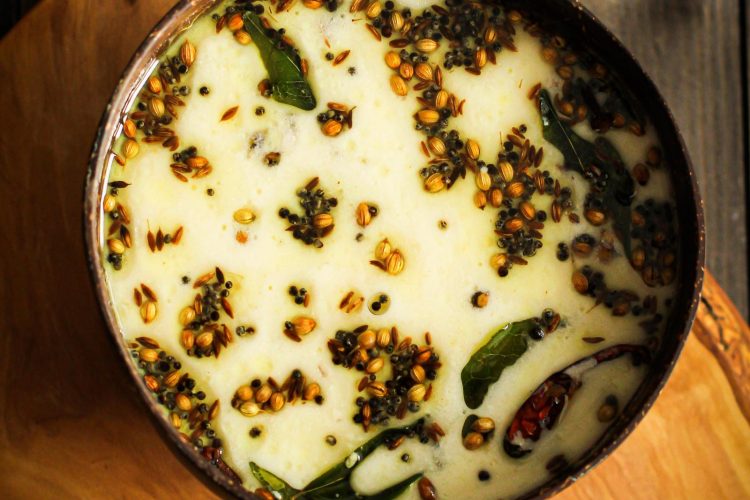 Kadhi, needs no introduction to an Indian. It is often about as yellow as a dal but tastes nothing like it. It’s so versatile, that almost every corner of India has whipped up its own version of this dish. This unsung dish can be prepared in just 30 minutes so on hectic days when you’re lacking inspiration or the fridge is nearly empty, the humble kadhi comes to the rescue time and again! It goes wonderfully with plain or pulao rice.

So, what is kadhi?

Kadhi simply put is a spiced buttermilk-based curry with some flour, typically gram flour (aka ‘besan’ or chickpea flour). I said ‘some’ flour because if you set your imagination free, you can relish a delicious bowl of kadhi made with flours of various sorts. During the winter fasting period in India (called ‘Navratri), women often add amaranth, buckwheat, or even chestnut flour to their kadhis to keep them going all day. There are even kadhis that have done away with buttermilk and yogurt completely; instead, tamarind or kokum (garcinia indica) is used to provide the sour note to the curry.

It’s mildly spicy, sour and sometimes sweet, depending on your recipe, with a clean flavour and velvety texture of buttermilk. How runny or thick your kadhi is, partly depends on the quantity of flour you use and how long you cook it for. And if you want to enjoy some complex flavours and extra texture in your kadhi, toss in a few assorted veggies like Sindhis do or drop in a handful of ‘pakoras’ (gram flour fritters) like Punjabis would, otherwise feel free to splatter it with delicate ‘boondi’ (tiny crispy balls of deep-fried gram flour) to add an extra crunch to each mouthful.

Maharashtrian kadhi is usually spicy, sour, and sweet, much like Gujrati kadhi, just a tad runnier.

I enjoy it plain and runny because then I can slurp up a couple of bowlfuls, like warm soup, to help cope with the cold weather here. That’s why this Maharashtrian kadhi is popular in my household. It’s just the perfect antidote to a cold, cough or the lurgy when there’s a nip in the air.

Within Maharashtra itself, kadhi comes in several varieties. There’s ‘solkadhi’ made with kokum which is popular in Western Maharashtra. Then there’s kadhi made with raw mango called ‘ambyachi kadhi’. And the one that’s made with buttermilk is called ‘takachi kadhi’.

Why is your Maharashtrian kadhi special?

Well, for a start it’s my mother’s recipe which I have taken her permission to share here and I am grateful for that. Secondly, it has subtle undertones of Maharashtrian ‘thecha’ and coconut that make this kadhi a joy to slurp. Lastly, my Mum also adds a cinnamon stick, whole black peppercorns and cloves along with fenugreek seeds to balance this dairy-heavy curry with aromatic digestive spices. It’s just perfect for the cooler winter months.

What is buttermilk and is there an alternative?

Whenever my mum made ghee at home, there would be kadhi for dinner. She’d use the runny whey left over from churning the accumulated cream, which is traditionally called buttermilk, to make kadhi. Buttermilk is a rich but low fat, sour liquid that’s full of healthy, harmless bacteria that develop naturally whilst the cream is left at room temperature before being churned to extract ghee. So, traditionally, buttermilk is prepared as a by-product of the ghee-making process.

In today’s fast-paced world, people have the option to buy this cultured milk, much like the drinkable yogurt called kefir. Kefir is thicker and sourer than traditional home-churned buttermilk.

Personally, I like to follow a more sustainable way of procuring buttermilk in which nothing is wasted. So I use the buttermilk from the ghee-making process or even shrikhand making. But if you are short of time and can’t churn buttermilk, make your own by simply diluting Greek yogurt with water. That’s what I’ve done in this recipe and it makes a decent, sour and tangy kadhi. Please refer to the ‘Notes’ to learn how you can adapt this recipe to make kadhi straight from traditionally churned buttermilk or from kefir.

What is the history of kadhi?

It is widely believed that kadhi originated in the deserts of Rajasthan in India, where swapping water with dairy, yogurt or ghee is common practice in the kitchen. The scarcity of water and fresh greens is usually compensated for by adding dairy and chickpea flour. Furthermore, in the words of food historian KT Achaya,

“Some also believe that the yogurt-based Karhi is from Northwestern India and is a precursor to what came to be known as the British curry. The British were exposed to this saucy dish much earlier than to the foods of the south; they had entered India in the early 1600s through the northwestern city of Surat, making kadhi quite possibly the original curry.”

So perhaps it is the humble kadhi that we have to thank for getting Brits hooked on what has evolved into some of the nation’s most popular (and tastiest!) dishes.

My kadhi recipe in brief:

I cook kadhi in two stages:

In the first stage, I whisk some gram flour in Greek yogurt. Then, dilute it with water to prepare the ‘buttermilk’. I then add hand-pounded green chilli, fresh ginger, garlic and dry coconut and whisk it again. I season the buttermilk with salt and sugar as it simmers over a low flame. Once it comes to a gentle boil, I switch off the flame and leave it covered.

The second stage involves making a ‘tadka’ or tempering with mild digestive spices like fenugreek, asafoetida, mustard and cumin. Any extra herbs, curry leaves, a cinnamon stick, cloves and peppercorns, along with extra garlic if I fancy it, go into my tadka. The finished tadka is poured over the kadhi, mixed well and left covered to capture the fragrance of those aromatic spices.

Kadhi is a spiced buttermilk-based curry with some flour, typically gram flour (aka ‘besan’ or chickpea flour). This gluten-free dish is mildly spicy, sour and sweet with a clean flavour and velvety texture of buttermilk. It’s slightly runny and deliciously warm.